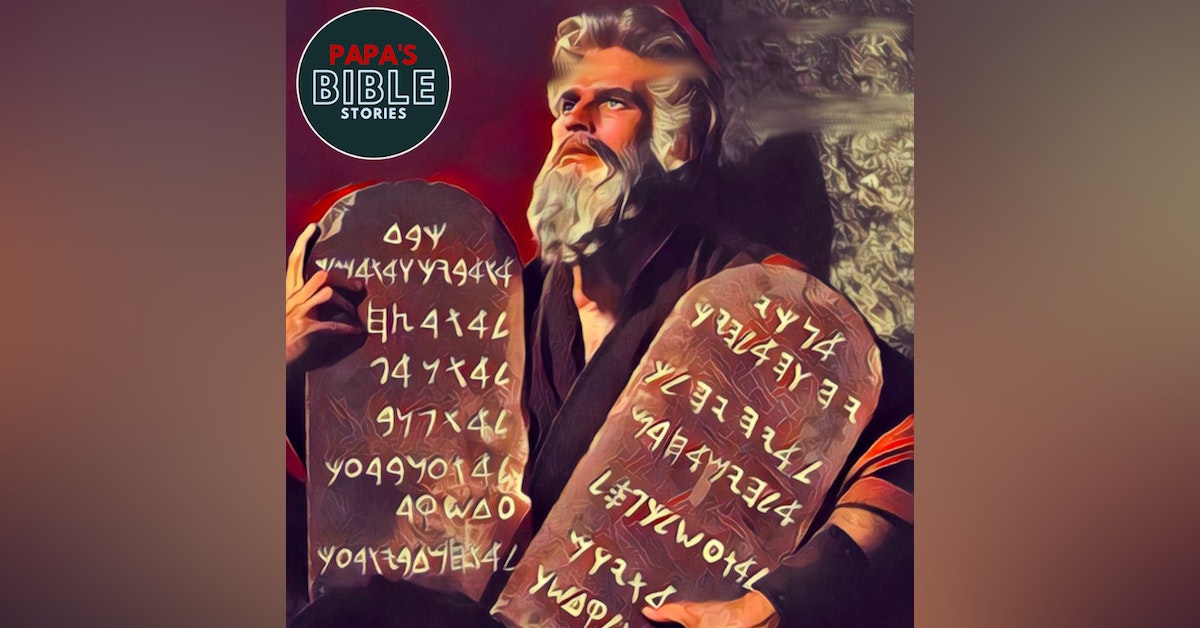 “Papa’s Bible Stories” brings the Bible to life for your kids.  For each episode, I pick a Bible story to talk to my very own kids about.  The stories are entirely Bible-based, scripture is quoted at every opportunity, and the kids are always pointed to the Bible as the authority.  And we’re not afraid of having a little fun too!  It is my hope and prayer that your kids will be excited to explore God’s Word for themselves after hearing each and every episode.  #bible #stories #kids #children #adventist #sda

Last we left our story, things were looking pretty grim for the Israelites.  They’d worshipped an idol…right after having been given God’s law…which said not to worship idols.  Moses plead for the Israelites…that God would spare them from being completely destroyed.  And God relented, but there were still some consequences.  Three thousand people ended up dying.  God sent a plague.  The pillar of cloud that had been leading them…left.  Even Moses, their fearless leader who’d plead with God for them, took his tent and moved it way away from the Israelite camp.  The covenant was broken.  Things were not looking good for the Israelites.  How would they ever get out of this mess.

But…then…just then…just when things seemed to be at their worst…just when the Israelites were realizing the full weight of their mistakes…this is when things began to turn around.  When Moses went out to be in his far off tent (which btw was called the Tabernacle of Meeting), the Bible says that “all the people rose, and each man stood at his tent door and watched Moses until he had gone into the tabernacle.” (33:8) The Israelites were desperate for something…anything…any sign that God was still with them…that He wasn’t going to abandon them.  And they weren’t disappointed.  Just as Moses entered into his tent, the pillar of cloud came down from the sky and “stood” at the door of his tent…and then through the cloud God talked with Moses.  And the Israelites took this to mean that there was a chance that God, through Moses, was just maybe going stick with the Israelites.  And in response to seeing this, the Bible says that “all the people rose and worshiped, each man in his tent door.” (33:10) The Israelites were super thankful even for this small sign that maybe…just maybe…God wouldn’t abandon them.

And Moses, now fully committed to restoring the Israelites to their original place with God, continued to plead for his people.  And Moses said to God, “If Your Presence (that is to say…the pillar of cloud) does not go with us, do not bring us up from here.  (16)  For how then will it be known that Your people and I have found grace in Your sight, except You go with us? So we shall be separate, Your people and I, from all the people who are upon the face of the earth.” (33:15) Because of the Israelites’ sin, God had taken away the pillar of cloud that had gone with them since Egypt.  The pillar of cloud had protected them from the sun during the day and provided light during the evening.  But maybe more importantly, it had been a clear sign, both to the Israelites and to the surrounding nations, that God was with them.  And the people desperately wanted the cloud to come back.  But…what were the chances that God would say yes to this?  Hadn’t they done something terrible?  But God replied to Moses and said, “I will also do this thing that you have spoken; for you have found grace in My sight, and I know you by name.” (33:17) Moses’ pleading on behalf of the Israelites had worked again…and now God had promised that the pillar of cloud would indeed continue to go with the Israelites.

But Moses wasn’t done yet.  The covenant was still broken…the Israelites were still not God’s special people like they had been before.  But Moses knew God well…and he knew that God is merciful and gracious.  And maybe, just maybe, God would completely forgive the Israelites for what they had done…and maybe even restore the covenant with them so that the Israelites could be God’s special people again.  Was such a thing possible?  I mean the Israelites had really messed up, right?  Was God really that merciful to completely restore them back to where they used to be…almost like nothing had happened?  Well, Moses was about to find out.  And Moses said to God, “If now I have found grace in Your sight, O Lord, let my Lord, I pray, go among us, even though we are a stiff-necked people; and pardon our iniquity and our sin, and take us as Your inheritance.” (34:9)

And without any hesitation, God immediately responded, “Behold, I make a covenant. Before all your people I will do marvels such as have not been done in all the earth, nor in any nation; and all the people among whom you are shall see the work of the LORD. For it is an awesome thing that I will do with you.” (39:10) So God would restore the covenant with Israel.  And not only that, but God was promising to go above and beyond the promises He’d given before…to do miraculous things with them that no one had ever seen before.  Even after everything that they’d done, even after making a terrible mistake, God forgave the Israelites and restored them to exactly where they were with God before they’d messed up…before they’d worshipped the Golden calf…plus He gave them even more!  What an amazingly merciful God that we serve!

And Moses spent 40 more days and nights with God up on the mountain…at the end of which God again wrote the 10 commandments on two tablets…just like he’d done the first time.  And at the end of the 40 days, Moses started back down the mountain.  Now on his way down, Moses was probably at least a little bit scared that another disaster was waiting for him like last time.  But, when Moses got to the bottom of the mountain…wouldn’t you know it the Israelites hadn’t done anything crazy while he was gone…and they were patiently waiting for Moses to hear what God had told him.  Phew!

Now as Moses approached the Israelites, they noticed that Moses’ face was shining.  Moses had been spending a lot of time with God recently (40 days the first time…then 40 days again just recently) and it seems like God’s glory had somehow rubbed off on Moses a bit…to the point where his face shone with its own light.  I guess that it was kinda like that glow-in-the-dark stuff that you kidzos have on some of your clothes and toys…except that it was on Moses’ face and it was shining during the day.  And with his face shining, Moses was finally able to tell the Israelites all about the tabernacle.  (Ya know because last time he’d gotten slightly interrupted.)  So…not only had God forgiven the Israelites…not only did he give them the pillar of cloud…not only had He restored the covenant…but God would also go ahead and give the Israelites the tabernacle…the way for the Israelites to be extra close to God.

And after Moses had told the Israelites all about the tabernacle, Moses came to them with an ask.  And he said to the Israelites, “This is the thing which the LORD commanded, saying:  (5)  'Take from among you an offering to the LORD. Whoever is of a willing heart, let him bring it as an offering to the LORD” (34:4-5) And then God listed all the things that would be needed to build this tabernacle…gold, silver, bronze, different colours of cloth, skins, wood, oil, spices, and precious stones…all very valuable and expensive things.  And what did the Israelites do?  Well, after everything that had happened, and after God had been so gracious with them to forgive them for their huge mistake…the super thankful Israelites of did what you’d expect…they started giving.  Each Israelite took from their own stash and gave their stuff to the people building the tabernacle.  And each day the Israelites dropped of more and more for stuff for the builders.  And as the days went by, the Israelites kept on giving more and more and more…until there were mountains of gold and wood and precious stones and oil and spices all over the place.  And it got to the point where the builders eventually had to go to Moses and say, “The people bring much more than enough for the service of the work which the LORD commanded us to do.” (36:5) And Moses had to actually give a command to the Israelites basically saying, “Hey…stop giving…we already have everything we need!”

And after some time went by, and after all the different parts of the tabernacle were build, God told Moses, “On the first day of the first month you shall set up the tabernacle of the tent of meeting.” (40:1) And so, on the first day of the month, Moses assembled the tabernacle.  He setup the outer fence and the outer gate, then went inside and setup the tabernacle of meeting, including the veil separating the holy place from the most holy place.  Then he setup all the different articles…all the alters, the laver, the table of showbread, and the lampstand.  And then finally Moses took the 10 commandments, put them into the ark of the testimony, and put the mercy seat on top.  The tabernacle was finished.  And then the Bible says that, “the cloud covered the tabernacle of meeting, and the glory of the LORD filled the tabernacle.” (40:34) God’s physical shining presence now rested with the Israelites in the tabernacle…and God’s presence would continue to reside with them for many many years after this.  This was a privilege not given to any other people or nation…even after the terrible mistakes that they’d made.  What a wonderful and merciful God that we serve.

And with the tabernacle built and the new sacrificial system in place, and with the 10 commandments other laws firmly in the people’s minds, and with God’s presence now with them in the Tabernacle, the Israelites were finally ready to head to the Promised Land.  And boy…they sure had been through a lot since they’d arrived at Mt. Sinai.  And as the Israelites started to think about the days ahead, I bet that not a few of them spent some time thinking about what they’d learned during their time at the bottom of the mountain.  And perhaps a few of those things we could also learn something from.  Like for example, while the Israelites were no doubt super thankful to God for being so merciful and forgiving…they were probably also very thankful for Moses.  Moses had stood by them in their most vulnerable moment…he’d plead for them and prayed for them…and God had listened.  You know, the Bible says that “the fervent effective prayer of a righteous man availeth much.” (Jam. 5:16) And you know kidzos, just like how Moses prayed for the Israelites…so we too can pray for mercy, forgiveness, and all the other nice things for our friends and family.  And maybe, just maybe, even though none of us deserve it…God will give them extra special mercy and extra special forgiveness…just because you asked for them…just like Moses did for the Israelites on Mt. Sinai all those years ago.